Part 2 of 3: Getting real about river restoration on the Santa Fe River

When I started intensive work on the Santa Fe River in 2007 I was a relative newbie to the practice of fluvial geomorphology.  And yet I soon found myself running laser-level surveys and coordinating a team including some of the best in the business of innovative and proven practices in stabilizing river banks, reconnecting incised channels with abandoned floodplains, along with practicing agroecology and native revegetation of river banks.  I found it challenging to coordinate the group, one of them a wizend, soft-spoken elder with a very deliberate and paced ways coming to conclusions and others much younger, fairly proud and outspoken.

And to top it off the work was right in my neighborhood where I’d lived since 1992.  I cared a lot about the results — many years of walking the river got my skin in the game.  And now my career would be counting on it too = skin in game.

The river by my home has been thrashed over the years.  It has been scraped for gravel, driven over by hundreds of cars a day, and deliberately excavated to lay a wastewater main line down the middle at least for several hundred feet.  The river has been treated like a drain and like it doesn’t really deserve water.  Here are some historic photos of the old road crossing and the view of the river looking upstream from the newly built footbridge by Frenchies Field built about 2007 before revegetation.

The road crossing, now closed, goes right over a sewer manhole cover put in the middle of the river bed by the shell of the truck heading up to Alameda on the right.  The entire bankfull channel gets crammed into about 40 feet wide area just as the former City boundary met Santa Fe County’s boundary, a sure recipe for poor coordination and mismanagement of an open space.

There has been many efforts to improve the health of the Santa Fe River including a citizen’s committee around the mid-1990s to create a plan — the committee did produce a good plan that was largely ignored and the City proceeded to build a hardened canyon west of St. Francis.  The “restored” channel kept the same straightened pattern but installed looked some what better (ie, planted some trees in ferrocement Disneylandesque formations followed by check dams.  The historical City policy of allowing channel downcutting in this reach to get the river running free BELOW a sewer main pipe now running under a footbridge.  To this day the river runs between St. Francis and Camino Alire and there is no channel meandering in the floodplain nor incorporating natural channel dynamics such as pool, riffle, bend patterns.  In contrast, the conceptual design our team wrote for Camino Alire to Frenchies was most intensive, comprehensive, and well-staffed efforts in living memory with local experts no less.  What an opportunity! 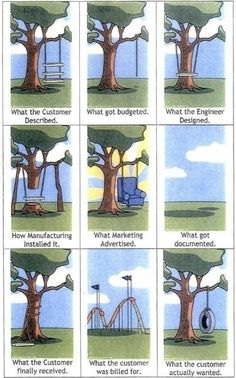 It was a tough project and my tendency towards optimism was tempered my several challenges, the first of which our team ran into involved communicating with the project manager, a landscape architect with the prime contractor for the now-defunct company based out of Albuquerque, called Resource Technology Incorporated.   In many ways we just approached our work very differently.  For instance, the project manager and his engineers use plans and drawings looking at the river starting at the bottom of the river reach and spatially going upstream when counting the length of river reach.  How strange thought the natural channel team members who generally analyze the river like a water drop flows and impacts a stream, from the top of the river and heading downstream.

Our job was to show how the analog approach and practices of Natural Channel Design (ie David Rosgen) and Induced Meandering (Bill Zeedyk was on the team) could be applied in the design.  Yet the one of the engineers on the team suggested the check dams on the river.  This proposal was roundly rejected by the river restoration team members based on what we had seen of check dams at Ricardo Road, right in the middle of the design reach. We know from experience and practice that man-made structures need to be placed with careful and deliberate consideration of the way water works river channels using an analogue method based on surveying the channel and nearby reference conditions of other channels.  And check dams are not found naturally in the reach of river we were working on (unless built and constantly maintained by beavers).  The engineers seemed confident they could defy nature and build what they felt was needed — they even suggested moving the entire river 70 – 100 feet to a different area to avoid having to build an expensive footbridge.

Both RTI staff and the natural channel team taught each other about some of the tools in our toolbox.  We taught them about baffles and vanes, water deflectors used to build point bars and prevent bank erosion respectively.  But once we shared the tools the RTI staff would suggest application of the tools in improper situations.  For instance, RTI took our conceptual design and made their own version showing baffles being placed directly across from vanes on the opposite riverbank.  The misapplication of our tools would essentially channelize the river and creates high shear stress on the river bed and greater potential for erosion of the river banks and thalweg and would in effect “harden” the banks.  The misuse of structures and our efforts to correct them is all part of the process but some in our team felt offended that the RTI team took such liberties.  We told them that this was a bad idea and I’m grateful they listened to us!

As sub-contractors, they paid us to advise them, not make the final decisions. Our bosses generally were treated respectfully, and still my colleagues on the natural channel team felt like we didn’t have enough authority to make the final recommendations to the City.  So, tension between members of the larger team became evident particularly when the use of checkdams was proposed as an alternative to natural channel design.  which wasn’t adopted yet the rankled feelings were not well addressed.  I’ll take some responsibility for the miscommunication — I lacked experience doing restoration contracting at this scale at the time and sometimes felt despondent and lacking in motivation to try and smooth all ruffled feathers.

We gave the engineering firm a series of plans showing proposed location of structures including maps, rough dimensions of structures, and several three conceptual stormwater management designs for tributary/open spaces that contribute to the river.  By spring 2009, 2 years of working the project, we delivered our conceptual design to RTI and by the fall the Albuquerque firm gave to the City a set of plans that differed in several ways from our conceptual design. RTI proposed the use of gabions, placement of extra crossvanes and baffles across from each other  (perhaps as check dams in the engineer’s mind?), and an amalgamated design with several natural channel specifications and harder engineering approaches to protect the new trail. But ultimately, the major directives we proposed were adopted by the City in the final plans would lead to a healthier river not just ecologically and in erosion control.  And the addition of the trail would make safer, more well-planned ways to connect neighbors to the river.  Bill Zeedyk and I as the final negotiators at the last design meeting decided to proceed with giving the company our approval (2009).

After another 2 years , about in 2011 (it takes a really long time to acquire land for river projects like these), the City finally got to work by hiring the lowest bidder, RL Leeder, a local contractor with no experience in building river restoration projects.  Let the earth moving begin!

At this point I was feeling fairly challenged by the project because I saw familiar sections of the river become entirely obliterated in one of the most severe droughts of 50 -100 years.  Induced meandering and most natural channel design projects never looks something like the photo to the left!  I was kind of alarmed at the lack of vegetation that emerged complete realignment of the river channel based on recommendations by RTI engineers.  Does Induced Meandering have an effective function in urbanized, low-permeability, fast runoff channels like the Santa Fe River — probably not in some situations? One team member recently said, “We could argue about that for a while.”

I have come to believe that adaptive approaches such as using large-scale one rock dams with new innovations such as locating and building shallow aquatards with local clay with little permeability to perch water in the root zones of trees.  If the earthmoving is going to happen why not get really intelligent about it.

Now that about 9 years have passed since starting and now I’m gaining a completely different perspective on the project.  This last photo is from Frenchies Footbridge looking upstream.  The work actually has generated some amazing results and I’m much more pleased with the outcome than I anticipated I would.  Some of the structures have fallen apart but most of it is still intact and the revegetation has really taken hold.  It looks a heck of a lot better, many banks have erosion controlling native plants covering them, and the trail has created tremendous social capital as people come out of their homes to re-occupy (or re-garden as I like to say) the neighborhood floodplain that runs sometimes.