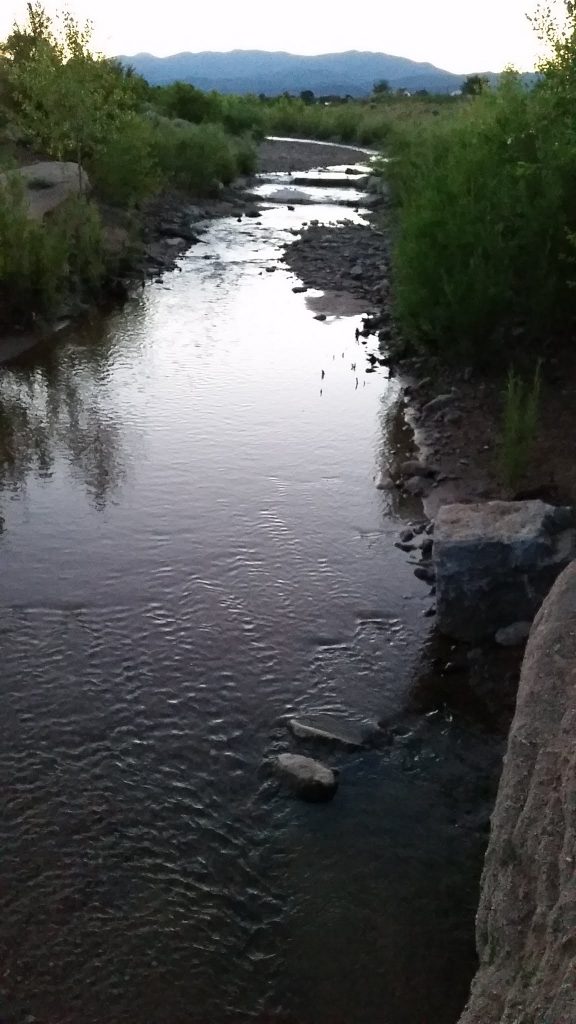 I present a series of blogs in 3 parts: 1st = how did we get here, 2nd = what is happening now, and 3rd = what is suggested for increasing ecological health and park values.

I’ve been bothered watching a section of river degrade in my neighborhood, not just because I helped formulate the restoration design and I hate to see rivers actively degrading, but also because City of Santa Fe staff recently suggested that the design wasn’t done correctly.   The reasons for rivers degrading is always pretty complex and nuanced, so I figure now that I’m in a place where resting and reflection time is built into my daily routine, why not aim to set the record straight with some photos, reflection and sharing what I’ve learned?

In 2011, the City implemented a restoration design conceptualized by myself, Bill Zeedyk, Steve Vrooman, Van Clothier and myself, a design which was finalized by a now defunct engineering firm in Albuquerque (RTI) that had the primary contract.  The City hired the lowest bidder, RL Leeder of Santa Fe which has served asphalt and concrete needs of Santa Fe since 1967 (https://www.rlleeder.com/).  To my knowledge Leeder had never before built a river restoration project or the structures we proposed.  The structures we proposed have been proven and tested in bigger rivers than ours.

The design we conceptualized was also “tweeked” by the engineering firm and represents some compromises that the company negotiated with our team — their management of the project was very challenging and sometimes divided us.  For instance, the engineering firm pushed for gabion baskets as footers underneath rocks that weigh several tons and could eventually rust, break apart, and cause shifting of the boulders.  While we pushed for quality construction RTI promoted cost cutting measures and in some cases eventually prevailed over our objections.

Big monsoon-type storms in 2013 (September) and 2014 (August and September) led to one of the crossvanes to begin falling apart at which point I notified the City in August 2014 that the crossvane was about the fail with a note that said, “I’m sending you a photo from this morning of a cross vane that is beginning to be compromised by water undercutting rocks of the top tier on the left bank arm (see foam on photo shot from bank right and the look to the right side of photo for water flowing under rock). ” See the August 2014 below and the foamy area where the crossvane started to fail. 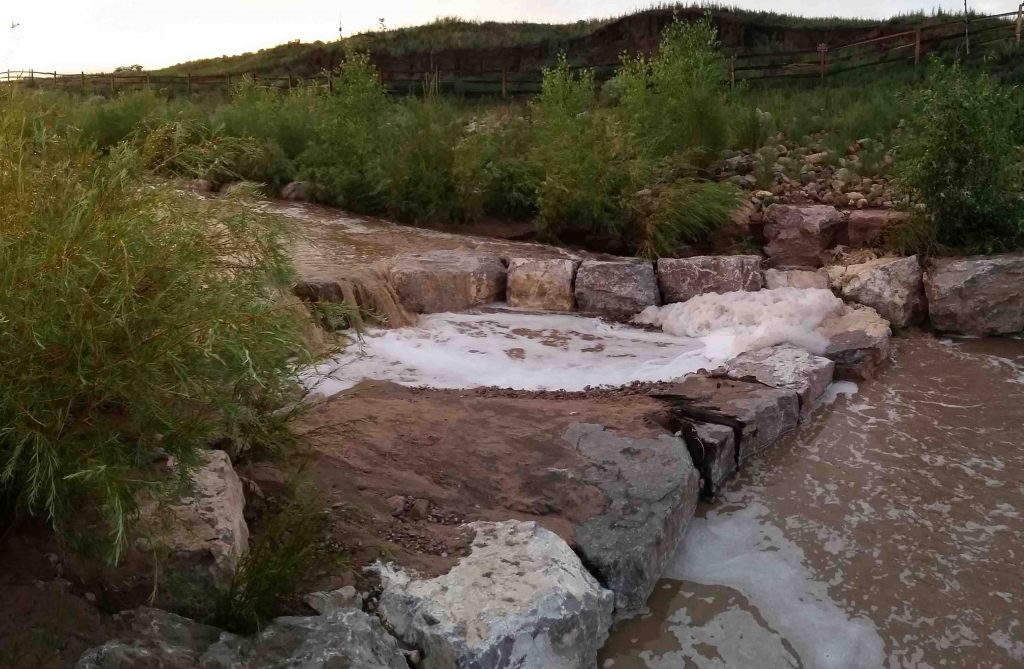 By the end of the monsoon season the crossvane had decomposed and by June 2015, several feet of the river bed had washed away and about 600 feet of riverbanks have been chewed away causing recently planted willows and cottonwoods to loss the soil sponge that kept their roots moist.  The cross vane looks like this now (shot from the opposite bank).

The design of the crossvanes were initiated by Steve Vrooman and Van Clothier who were guided by years of experience in design and installation,  natural channel design training, and the oversight of Bill Zeedyk and myself.  A local engineer from yet another defunct engineering firm who was part of the team made an attempt to draw what Steve and Van described but that drawing turned out incorrect, in part due to his inexperience in natural channel design principles based on Dave Rosgen’s teaching, at least at this point in his career.  The final drawing was prepared by a CAD / mapping expert working for RTI with our team’s input, review and redrawing. The center of the arch has a keystone that keeps everything locked together, like a Roman arch, and at the lowest elevation in the channel the arms rise up at a 3% grade (0r they are supposed to, which I’ll discuss later).   It looks like this: 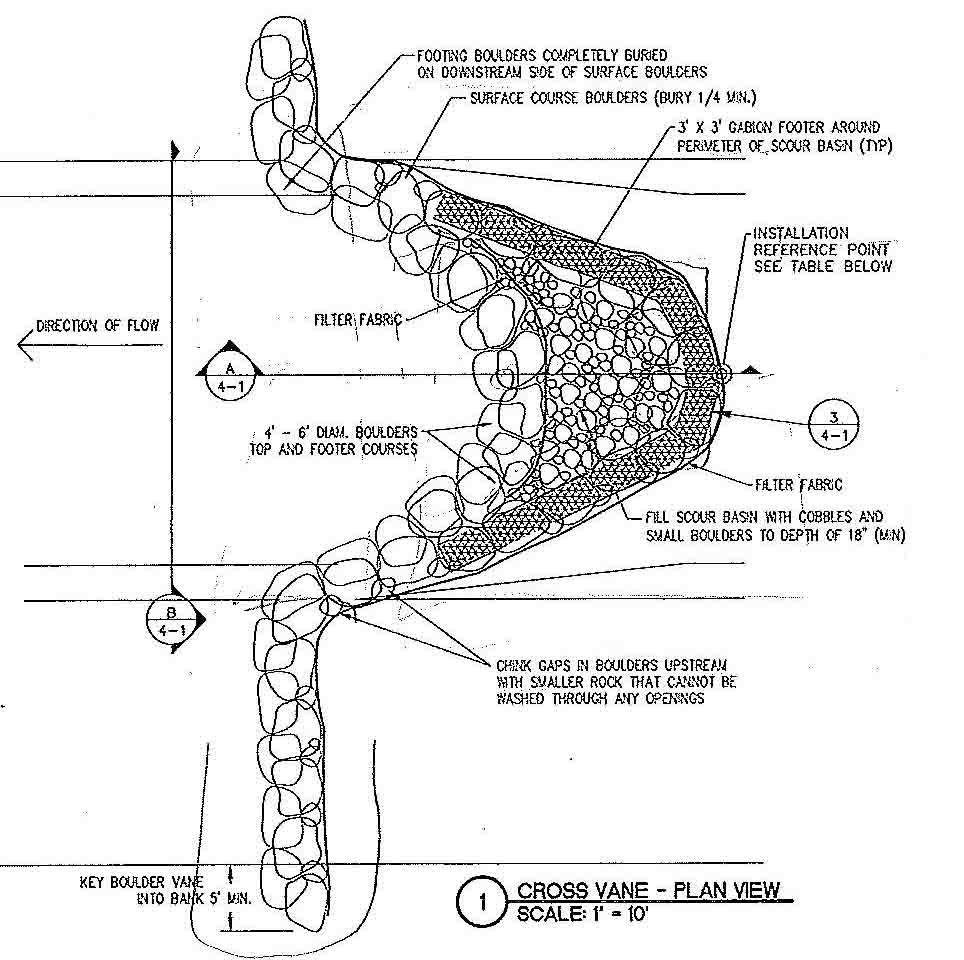 Recent critical comments by City of Santa Fe Public Works staff originated from a discussion they had with an engineering “expert” who told them that the wings, or arms, of the structures need to rise up from the channel.  No doubt this person knows his business because he is correct…. the arms should rise slowly so that the structure’s top elevation rises to meet and lock into the banks of the river.  But during the installation by RL Leeder, these 3% grades were not always built or if they were built many of the 3% slopes did not hold.

And there was another problem… RTI pushed for using gabions as the lower tiers of foundation of the rocks.  We fought to make sure the bottom foundations were made with solid rocks rather than wire cages filled with rocks.  But eventually, Bill Zeedyk and I capitulated on giving the builder the flexibility to use gabions after RTI relentlessly pushed for it.  RTI wanted to cut costs.  And the builder, Leeder, may have done the same as several tiers of rock have no gabion or rocks underneath them as we specified.

Why are gabions hazardous to build within a river floodplain?  The wire rusts and eventually breaks and the results can be seen all along the river corridor — tetanus-carrying shin and foot cutters sticking out and buried in unforgiving areas.  In addition, the weight of the rocks can compact the wire cages, reducing the elevation of the arms.

The settling elevation of several rocks on top of the gabions is probably one reason the cross vane failed.  But, the main reason is because the builder had never done this kind of construction before.  And the City didn’t know better — that it often takes a seasoned builder that can respond to local conditions to build a structure that will last longer.

A final reason is because the City decided to bid the project so that the winner with the lowest cost got the contract, not the bidder with the best qualifications.  If the contract was awarded based on qualifications, several other groups with experience would have bid on it or RL Leeder would have reached out to experienced river restorationists to be on their team.

One final failure in the design in my perspective — the crossvane was put along the apex of the bend in the river.  Crossvanes need to be located at the corner of the bend where the thalweg, or deepest point in the river, is closer to the center of the channel rather than the side of the channel (I corrected this paragraph on 7/10/15 with input from Steve Vrooman and another person who have more training than I do in this field).  The August 2014 photo proves my point –look at the foam bubbling up under the rock that is on the far side of the channel where the thalweg is running on the far left, bend-side of the channel.  Putting a crossvane on the apex of a bend is unconventional and would take a very crafty builder to make it work.  Usually crossvanes are put in a crossover location because the thalweg will more predictably run in the center at the channel where the keystone, or linchpin rock in the center of the arch in the channel, is located.

Part 1 of 3 now concludes… later I’ll post on what is happening now (an RFP has just been let out for the repair!)  for part 2 and ideas for how to move forward for part 3.

PrevPreviousHot legislation for 2015 to create a secure water & climate future!
NextPart 2 of 3: Getting real about river restoration on the Santa Fe RiverNext