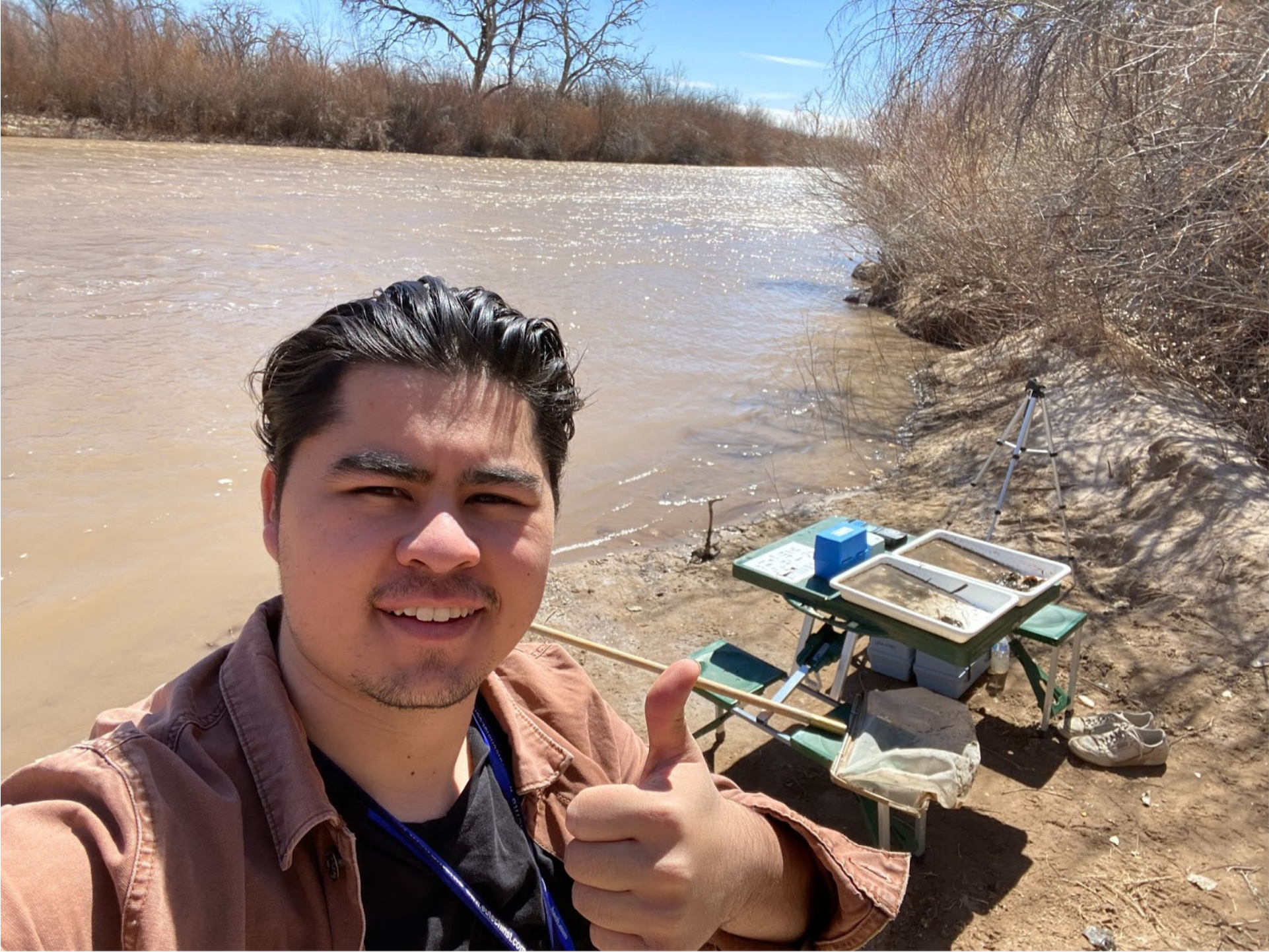 As I reflect on my time with River Source, I fondly remember smiling faces and beautiful places that I met and visited, all from the comfort (and sometimes, confines) of my own home. The 2020-2021 school year has been one for the books, hasn’t it?

As I ponder the future of my career and consider the past, I’m glad to have crossed paths with Rich, Carlos, David, and the River Source crew at the time I did. As we look to the future of hybrid processes and in-person meetings somewhere on the horizon, it is difficult for me to remember a time when we didn’t do things virtually. These Brady bunch Zoom squares have been an important learning experience for us all, and came to define my short time at River Source. And like all great River Source stories, it begins with a certain Californian-transplant-turned-New Mexican, Rich Schrader.

If my undergraduate career at the University of New Mexico taught me anything, it’s that who you know is just as important as what you know. This time, my social network led me to Rich Schrader through a previous colleague, Jennifer Schuetz, who I knew as a student during her time as the Bosque Ecosystem Monitoring Program (BEMP)’s science coordinator. I’ve been lucky enough to often find myself in the right place at the right time, and such was the case when I began my journey into local environmental work during my grade-school education. The Bosque Ecosystem Monitoring Program has been – and continues to be – an important lynchpin in my professional career, and the connections through Jenn naturally led me to Rich.

Like in many things, Rich and I reconnected, as we had previously met in the Fall of 2017 at a Green Jobs Fair at Amy Biehl High School, where I had been representing BEMP during my time as the memorial Crawford Fellow. And in Fall of 2020, as I was graduating from the University of New Mexico with my Bachelor’s degree, I joined the River Source team! Despite the uncanny nature of being a new addition to the River Source team in an entirely virtual format, River Source, Rich, and I, immediately clicked on a deeper level.

For much of my burgeoning career, I’ve marveled at the adaptability of New Mexican systems to adjust to the circumstance and River Source has been no different. The ability to instantly connect via Zoom, Google Classroom, or the virtual platform of choice means that your office is in your pocket, on your desktop. But there is a different sense of passion and drive that makes you feel transported into the office of the River Source team. While the environment might change, there are some things that are comfortingly constant – Rich’s banjo playing, Carlos’ stories, and David’s sage and familiar advice. Moreover, River Source had a spirit all its own that was immediately resonant. The pedagogy and philosophical practice of River Source reminds me that we are but visitors on this land. “Leave it better than you found it” became a recurring theme in my work, from the Youth for a Secure Water and Climate Future program to Watershed Watch educational programming for the New Mexico Department of Game and Fish.

The 2021 Youth for a Secure Water and Climate Future was met with unprecedented circumstances – a completely virtual NM State Legislature left us with a major gap in our conventional programming. How do you get students to feel like they are participating in a legislative process when they can’t physically be there? Our answer, and another recurring theme: bring the legislature to them. With some quick thinking and no shortage of ambition, we wanted to go above and beyond for New Mexico’s students in an effort to amplify their voices during a critical time in our history. To me, I was yet again in the right place at the right time. Tapping into River Source’s connections with local experts and advocates, I was eager to connect them with New Mexico’s students. In a series of four videos, I was proud to host River Source’s own Carlos Herrera and Outdoor Adventure and Rio Grande Return’s “Uncle” Steve Harris in a discussion on Water Security and Civics; Defender of of Wildlife’s Michael Dax and Maktima Flyfishing and High Desert Angler’s Norm Maktima in a discussion on Wildlife Policy and Civics; NM-based Southwestern climate journalist Laura Paskus and YUCCA’s Castille Aguilar in a discussion on Civics and Climate Justice; and Outdoor Adventure’s Pablo Lopez and Director of New Mexico’s Outdoor Equity Division Axie Navas in a discussion on Outdoor Equity and Civics! Each discussion, framed as an interview with the throughline of my role, an “intrepid, on-the-beat reporter,” had memorable moments. From Axie and Pablo’s stories of their hands-on experiences in recreation with New Mexican youth; Laura and Castille’s impassioned calls for equity and urgency in addressing the climate crisis; Norm and Michael’s vibrant accounts of their intimate histories with New Mexico’s wildlife; to sharing the cool, January air off the bankside of Rio Chama with Carlos and Steve. It was a lot of fun to make those videos, to say the least, all of which would not have been possible without the coordination and behind-the-scenes work of Rich and David.

And of course, the Youth for a Secure Water and Climate Future Program would have been nothing had it not been for our passionate, emboldened students! Again, the uncanny ability of online platforms to connect educators with students throughout the state – sometimes simultaneously – challenges our conception of community education and pushes the boundaries of classroom to classroom communication. For multiple Thursdays and Fridays during the month of February, we were eager to host open office hours for our students throughout the state, whether from Silver City, Santa Fe, Albuquerque, or Taos! In addition to delivering civics literacy curriculum and reinforcing and connecting students’ diverse interests, we were also able to connect students with local experts, such as some of our interview panelists, local environmental policy wonks, or local organizers and environmentalists who have been the foundation of our modern conception of environmentalism in New Mexico.

As for the students themselves, they never ceased to amaze me. Among the many interactions I’ll look back fondly upon, I remember a conversation with a student from the May Center, who passionately explained the bill they had chosen to study – Roxy’s Law – and the passion they had developed and channeled into a letter in support of the bill. I was proud to share that moment with my young colleague at the May Center, as well as many of the other passionate torchbearers who I recognized as future environmental leaders of New Mexico, especially as many bills – like Roxy’s Law and the Community Solar Act, passed the New Mexico legislature. I hope the students reading this can reflect on their work during a time beset with challenges and obstacles, taking comfort that their voice was heard, and that they have staked a claim in shaping New Mexican history. And to the students who support bills that did not pass – I hope your torches stay lit. Without engaged and empowered New Mexican youth, we lose what makes New Mexico, New Mexico.

This theme – that the people make the place, just as much as the place makes its people, couldn’t be better encapsulated than in a program like Watershed Watch. Just as we wrapped on Youth for a Secure Water and Climate Future, immortalizing the curriculum on our learn.riversource.net page, our small team dove headfirst into the rivers of New Mexico. Having a moment to return to the waters of the Middle Rio Grande’s San Acacia subreach, virtually guiding students from Cottonwood Valley Charter School on a field trip via the lens of my sturdy phone camera. I remarked to my River Source colleagues and my students that I felt a bit like Bill Nye the Science Guy, putting on a bit of a show – albeit an educational one – in the void that would normally be filled by students craning over Mayfly nymphs and water boatmen.

In many ways, the COVID-19 pandemic has been a frustrating, isolating experience – but in others, it has shown us the best of what we can be under even the harshest of times. My time with River Source was no exception. The speed with which this organization was able to ride the wave of shutdowns which accompanied the pandemic, shifting entirely in-person curricula to virtual experiences is no small feat. Moreover, despite the barriers of virtual connection, you can always count on River Source’s small team to appear with a smile, song, and even a banjo. The ability to deliver outstanding science education with a twinkle in one’s eye is a gift indeed. I’m humbled and proud to have been a molecule in that watershed, and, as the water cycle goes, I’ll never be the same.

Take note of these maverick operators and steal their practices. If you ask Rich, he’ll give them to you with a wink and a smile.