What I learned working with River Source- Cameron Quintana 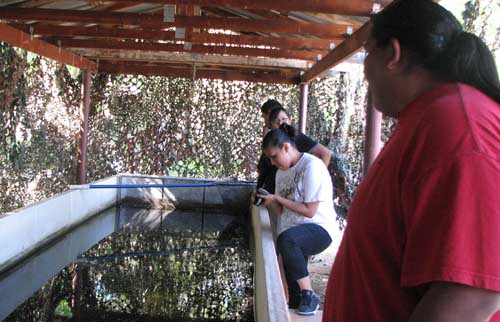 My name is Cameron Quintana, I am from the Pueblos of Cochiti and San Felipe. This summer I was involv 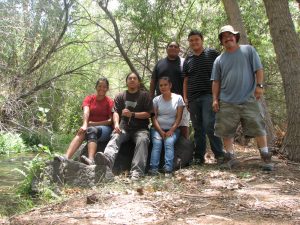 ed in a summer internship through an organization run out of Santa Fe, NM called River Source. Upon first entering this internship I had no clear details of what we would be doing other than working both at River Source and down at Cochiti Pueblo with their Department of Natural Resources staff.

When being first engaged with River Source, I was told we’d be doing work out in the field both with River Source and Cochiti Pueblo. Such field work included in the introduction to River Source was water quality testing, erosion control, and the ability to run an outdoor classroom that taught younger youth the fundamentals and importance of the quality of water. A couple examples of water quality testing would be the field days down in both Santa Ana Pueblo and out in Dulce.

While down in Santa Ana Pueblo, we worked with some of their summer language program staff and kids to teach them the importance of water quality testing and had 2 stations dedicated to water quality testing. One station tested the turbidity, total dissolved solids, dissolved oxygen, water coloration, the pH, and temperature of the water. The second station tested the number of microorganisms that inhabited the water. These same tests were run out in Dulce for their annual inter-tribal summer camp along with the introduction to several scientific fields, some of which were wildlife management, geology, anthropology, and range management. The introductions to these fields were a glimpse into the future of what we would be doing out in Cochiti Pueblo for the remainder of the summer.

On the first day of work in Cochiti Pueblo, Kai-T Bluesky introduced us to his vision of what he would like to see happen at the pueblo and what we could do to help him make it a reality. Our primary goal as a whole was/ is to  recreate another Cochiti Canyon in the vicinity of the lower Santa Fe River located on Cochiti Pueblo tribal lands for the people of Cochiti to utilize. Along with the restoration of the lower Santa Fe River, we would like to see the creation of a native botanical garden where traditional species would be grown as well as those that could be a vital part of the Cochiti Pueblo lifestyle, with also the introduction of wild turkeys into the area. In order to make this “dream” a reality we began the stepping stone phases of this restoration project. Some of the major projects we began were the measuring of the length and width of the lower Santa Fe River (which is a fenced off area due to cattle), GPSing of the riparian zones, the establishment of photo points throughout the area, water quality testing, pole planting of areas fenced off to cattle, and the wire wrapping of trees due to the vast impact that a few beavers have on the area.

Some of the other minor projects we helped and were introduced to in Cochiti Pueblo were the flood control projects with Phoebe Suina and her partner Ryan. They gave us small lectures and presentations on the flood plains, and high impact flood areas due to the Las Conchas fire in 2011. Phoebe invited us on a few field trips to explore the flood areas in Peralta Canyon, Cochiti Canyon, Cuye, and Ice Box and explained to us the importance of trying to reduce the flow of water going from the mountains down into the canyons downstream. We gave her ideas on what could be done to decrease the flow of water when floods do occur, from our experience of rock dam building out in Cuba, NM.

Further projects we were engaged in while working with Kai-T were field trips out to other Pueblos to get brief introductions into their own environmental departments. These pueblos include Santa Ana, Santa Clara, Sandia, Laguna, and Zuni. While in Santa Ana we met with Glenn Harper with our primary goal on this visit being to discuss with him of the introduction of wild turkey onto their reservation, which we would also like to see happen in Cochiti in the future. The visit with Sandia Pueblo (the same day) also followed the same goal, we met with Tim Smith to get his ideas and support as we did in Santa Ana on the introduction of wild turkey into Cochiti.

The trip to Santa Clara gave us a brief introduction to their forestry department and their goals to restore their ponds on their tribal lands due to the impact of the Las Conchas fire of 2011. We were encouraged to continue on with our education into the fields of environmental studies so we could help tribes in the future without the help of those who do not understand the spiritual side of things.

Our trip to Laguna and Zuni was primary for the benefit of finding further departments to add in Cochiti. Whilst in Laguna we were introduced to their gaming management projects, and briefed on their goals of the future. Zuni was an entirely different experience from the rest and definitely the most intriguing and interesting. We went out to Shiwi land to explore their Eagle Aviary which in my opinion was a once in a lifetime experience because they do not let anyone into the aviary other than their own staff and society members. Even their own tribal members do not get to go in to be with the eagles. We met with Nelson Luna and he briefed us on the projects he has worked on over the years and the legal fights he is in to add the Zuni bluehead sucker to their endangered species list. He also intrigued us with the presentation of the establishment of the eagle aviary and seemed to encourage us to get one established in Cochiti (figures crossed).

All in all I have to say I really enjoyed this experience this summer with River Source and Cochiti Pueblo. I learned so much over the course of a couple months, more than I learn in a full semester of college. I only wish it didn’t have to end so suddenly because I have found something I have a deep passion for other than writing and anthropology. This overall experience left me intrigued and inspired to want to do more to support and improve not only my community of Cochiti but other tribes as well.  It has left me yearning to learn more in these fields and makes me wish I could stay here from here on out. Out of all the internships I have been able to experience, I have to say this has been the one that has left me wanting to stay and learn more. It was an honor to meet all the people I did and a pleasure to work with River Source and Cochiti Pueblo. I would definitely fill out another application if this internship was offered again because it is definitely something I have a passion for. Thank you Rich, Carlos, and Kai-T for this amazing experience! 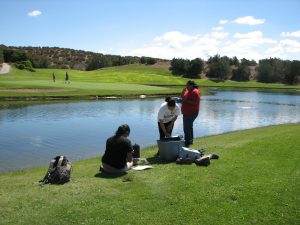